How Has Marble Always Adorned World’s Many Famous Mosques? 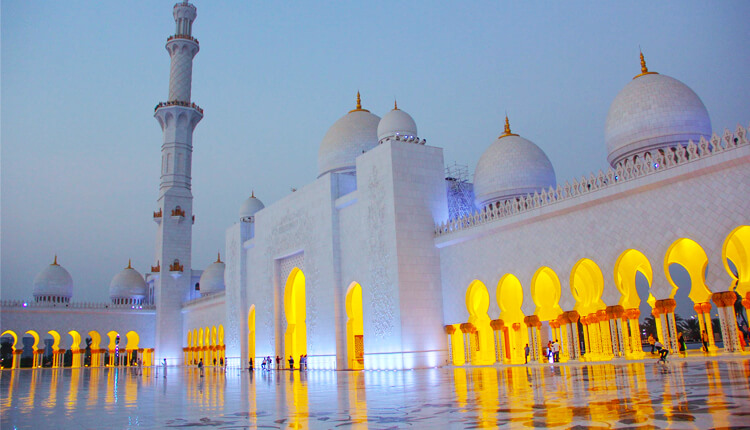 Natural stones and especially marble has always been an integral part of Muslim architecture worldwide. The marble flooring of the Grand Mosque and white marble tiles flooring surrounding the Holy Kaaba in Mecca (Makkah) stands as the biggest precedent. According to reports, the marble flooring remains cool under feet during the soaring temperatures in Saudi Arabia. And this adds to the experiences of pilgrims performing ‘Tawaf’ (circumambulation).

Marble has a unique character, look and feel that blesses any architecture with the vibes of gracefulness, serenity, and sanctity. And hence mosques around the globe embrace the natural stone in magnificent manners. Let’s explore some of the remarkable examples in the Middle East!

We couldn’t begin with any other mosque but Al-Masjid Al-Haram which is the Holy Mosque or Grand Mosque built to enclose Kaaba, the holiest shrine of Islam. The oldest architecture of the modern structure dates back to the 16th century. As compared to the ordinary marble, the mosque flooring is laden with ‘smart marble’ that shows intelligent thermal performance. It acts as a thin layer of natural material that stays cool under feet even in the hottest climate of Saudi Arabia (as explained in the introduction).

Masjid-e-Nabawi is the second holiest mosque in Islam which is in the vicinity of Kaaba. The foundation of the mosque was laid by the messenger of peace, Prophet Mohammed in One Hijri (622 CE) whose tomb is within the precincts of the mosque. It is the third mosque constructed in the history of Islam and today stands as one of the largest mosques in the world.

To talk about the natural stones used in the mosque, the white marble flooring in Al Masjid Al Haram mosque extends here. Moreover, today, the Minbar (tall and thin pulpit) of the structure is made of pure marble. The interiors are adorned with over 2,000 chandeliers and 100,000 light bulbs that illuminate the entire mosque. 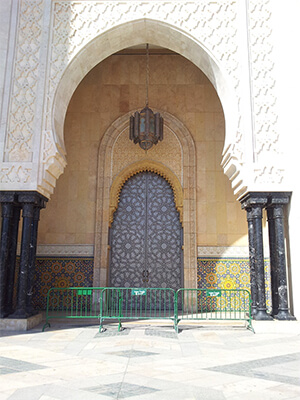 The Hassan II Mosque, completed in 1993, is a living example of contemporary Moroccan craftsmanship. The structure is built on a cliff of reclaimed land extending out right into the Atlantic.

The entire construction of the mosque is done using a wide range of materials. The primary ones include granite, marble, wood, glass, and plaster. Italian white granite from Italy embellishing its columns and 56 glass chandeliers are the prominent features.

The exteriors of the mosque are decorated with pale blue marble and granite finishes along with bronze and titanium.

Sultan Qaboos Grand Mosque is the largest mosque in Oman. Its construction involved 20,000 workers who built the structure in a time span of 6 years (from 1995 to 2001). The interior and exterior design of the building mimics a variety of architectural styles of the Arab-Muslim world.

The mosque’s entire pavement area that covers 24400 square meters is built from different marble varieties installed in geometric patterns. The surprise element of this mosque is that the building is made of 300,000 tonnes of Indian sandstone.

Beige sandstone was imported from India. Also, green, orange, mahogany, white and yellow natural stones were imported from other places such as Oman, Italy, and Egypt. 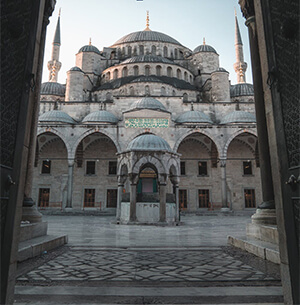 Going further into history, the Blue Mosque situated in Turkey was built between 1609 and 1616. This structure of blue, green, and turquoise hues blends traditional Islamic elements and Byzantine style to contribute to its magnificence.

The mosque has one primary dome, eight secondary domes, and six minarets. The interiors are made of 20,000 handmade ceramic blue tiles that gave its name to the mosque. Beautiful abstract patterns, flowers, and trees are artistically displayed using the tiles in the Iznik design.

The mihrab, the niche that is placed in the direction of Mecca is of great significance. It is the place where the imam stands to deliver his sermon at the time of prayers and is located in the main prayer room. This mihrab is sculpted with marble. And towards the right side is a tall and thin pulpit (Mimbar) that is also made of marble. 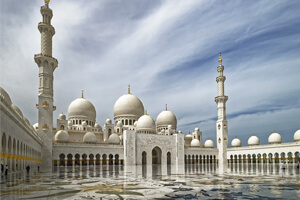 The Sheikh Zayed Grand Mosque is one of the world’s largest mosques located in Abu Dhabi, UAE. Opened in 2007, the mosque is famous for its massive architectural work of art. It showcases a beautiful fusion of different Islamic architectural schools.

Popular as the white marble mosque, it features a collection of 82 domes, over 1,000 columns, and 24-carat-gold gilded chandeliers. These stand as the most eye-catching elements of the structure. The domes are decorated with pure white marble tile cladding and onion-shaped crowns.

Arcades in the main prayer hall are lined with 96 columns - all clad in marble. Perhaps, the most noticeable feature of the columns is inlay work on marble. This marvellous technique of art comes from India where the first inlay work was invented by Mughals in Tajmahal, Agra. Nearly 90% of this talent of artisanship is found in the city of Agra in India. And today, inlay work on marble adorns thousands of mosques across the globe. Quality Marble Exports offers the same authentic inlay work on marble done by our skilled artisans.

Quality Marble Exports (India) is one of the leading granite and marble suppliers from India. We take pride in exporting world-class-quality marble, granite, sandstone, and other natural stones to different countries in the Middle East. Some of these include Qatar, Turkey, and the UAE.

If you are looking to embellish your prayer space at home like the famous mosques, natural stones are the way to go. How about mimicking the extraordinary designs of mosques? We provide exact quality natural stones used in world-famous architectural projects. In fact, you could bestow any space in your interiors with the purity, elegance, and sanctity of marble with our bespoke solutions.

For decades, Indian natural stones have been most sought after worldwide. Try decorating your personal space with one of our varieties and experience the difference.

Comprehensive Guide to Choose The Right Natural Stone Sink For Your Home Which Natural Stone Accent Wall Design Ideas Are Popular In The Middle East?